On November 1, 1939, a Master Roadster rolled off the assembly line.  It was a left hand drive car with engine 65707, which would be a Hill Master with three main bearings.  Nothing seems extraordinarily out of place about this car and happily, it has survived.

Here it is in all of its glory: 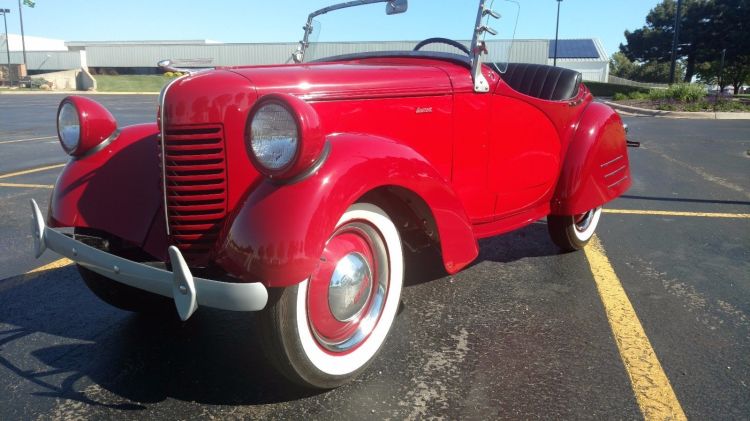 You can find it on ebay here: 1939 Bantam Roadster

The problem with attempting to learn things from a car with an older restoration is that you never know exactly how authentic something is, especially when dealing with a company known for going to the local hardware store to buy bits to keep the assembly line running.  This car is advertised as a 1939.  It has 1939 bumperettes, fender skirt trim, exhaust pipe, and an early hood ornament.  Yet, it also has 1940 hood side trim, a 50 lb oil gauge, a single cam Ross steering box, a frame with hydraulic shock mounts, a three main engine, a proper zenith carb (mounted backwards),  an underdash parking brake assembly, trimmed/louvered inner fender aprons, and a 1940 style shift lever. 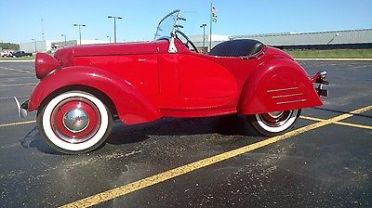 As you can see, not only does it have a three main bearing engine, which a lot of restorers have upgraded their cars to, it has its “born with” three main.  So as most signs point to this car being a Series 65 you must be wondering whatever could be the point of this rant.

So, here it is, the wrench that has gotten stuck in my gears: 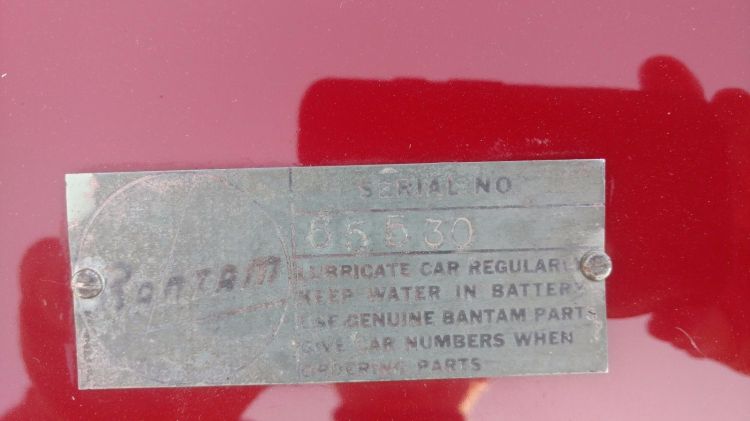 Nothing curious about this tag, it looks very original.  It has visible etching, it has the correct font, it is even held on with the proper screws.  However, if you look carefully, it’s completely out of place.  According to the Authenticity Manual which is published by the AABC, beginning with car 64570 Bantams received a much larger tag.  Something like this:

Aside from the fact that this car has what you may think is the “wrong tag”, if you look at the two tags illustrated above, you’ll notice the stamped font is the same.  Although similar to the number stamps used on the engine blocks, warranty tags were stamped with a slightly smaller variation thereof, and the warranty tags supposedly only began being stamped with this font at the introduction of the larger style tag.

I may have stated this here before, but the Roadster was intended to be obsoleted by Bantam in 1940.  Out of about the 1000 plus cars making up the 65 series run, only around 40 Roadsters were built.  Perhaps these bodies were already on hand and were just waiting for a chassis to slip underneath.  Perhaps all of these left over series 63 roadster bodies had this style tag attached.  However, there are other roadsters with earlier serial numbers which do have the larger style tag.  I would be curious to know if this body features the shorter cowl which many other 1940’s have been found to have, perhaps that may lend some insight as to why this car has retained a much older tag than the car actually is.

Without knowing the exact life this car has lived since November 1939, it would be impossible to know if this tag is 100% correct for the car.  For all we know, someone restoring the car in the 1960’s may have had access to an NOS factory tag and the factory stamps; no matter how unlikely that may seem.  I would venture to guess that this is the original plate for the car, proving itself to be an exception to a long accepted rule.