Finding old Bantams photos isn’t really one of the easiest things, however they do show up occasionally.  Usually those photos are focused more on the people than the car behind them.  Sometimes you can see a monochrome colored cove or a dusty fender.  Other times, the photo is so washed out that much of its detail has been lost to time.

This photo is quite an exception.  Beyond the 1938 Ford in the background, the main focus of this photo is on the roadster in the foreground of an early airplane.  Although the roadster is a bit beat up and there is an art deco sunburst of grease escaping from behind the front hubcap, the couple in the car really found themselves in a great photo.  Donning sunglasses, some sort of open collared shirt, an a huge smile; the duo seem like they could have been the adventurous kind.

If you’re interested in this photo, you may have some competition from me, but it’s just too cool of a photo to keep to myself.

Also, for comparison sake, here is another roadster photo: 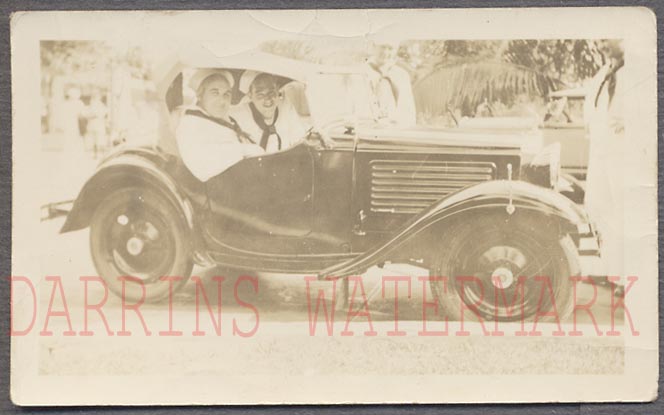 Click here to see a pair of Sailors in an Austin