This morning, as part of the Building a Better Bantam series, I would like to introduce you to John Larson. He is an active American Austin enthusiast on the west coast. So active in fact, that he arranged the 2017 Austin Bantam Society meet at the Santa Anita Racetrack. (Here is a video of that meet: https://www.youtube.com/watch?v=6lBwQt6Jx0I). He has a nice collection of these small cars and has been making sure to get fantastic exposure for the brand at car shows and over the internet. Perhaps you have seen his fantastic early American Austin panel truck at a show or posted someplace. It’s a great car, finished with an orange body and black fenders.

Just before the holidays, John unveiled his recent reproduction effort; cast aluminum American Austin hub caps. If you have restored an Austin or are looking to, you know that the original hubcaps are often very badly destroyed due to over-tightening with the rims pushed in from damage, running into curbs, having holes drilled into them, being taken off with pliers, and probably a multitude of other equally heinous acts. Personally, my car had three holes drilled in each so the caps could support 1937 Ford hubcaps in an effort to make the car seem more modern.

To add insult to injury, our Austin hubcaps don’t come up for sale all that often on places like ebay and as a result, the few that get listed find themselves conjoined with astronomically high asking prices.  One such listing advertises a single cap with a distorted face as being the only example in the world for the low price of $149. 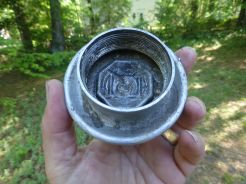 Click here to see The only ONE anywhere in the world

Mike Larro, of California, contributed an excellent article to the ABS’s Rooster Tails which details how you can repair an abused cap using a custom made anvil and copious amounts of patience. His article has given life to a lot of cast off caps and could be a fun, albeit time consuming, project. You can see his article in the ABS technical dvd available through the club store.

Although repairing the hubcaps could be fun, I love the idea of building a Better Bantam. Creating parts designed to look and function better than the original parts; items that will last longer than we’ll ever know. For hubcaps, that would mean a cast aluminum part machined to perfection. I didn’t know this had been done before, until I happened upon one on ebay about three years ago. It was a thing of beauty.

In searching for my cap’s history, I learned that in the past, a couple of people have reproduced Austin hub caps. The finest examples were undoubtedly crafted by Lynn James. Lynn’s work is always perfect and his patterns ensured that the cast Aluminum caps would be machined to the correct size, that the Austin lettering was perfect, that the hexagonal wrench interface was correct, and that they would survive the test of time. Lynn’s hub caps were made in a short run over a decade ago and have recently traded hands for as high as $200 each; a small price for perfection.

John teamed up with Lynn to put those magnificent patterns back to work again. Lynn also gave John invaluable advice in searching for the perfect foundry to pour the raw castings. Each casting then needed to be cleaned and machined to its final shape. As you can see, the patterns provided additional material all around to ensure that the cap could be cut to the identical profile of an original. 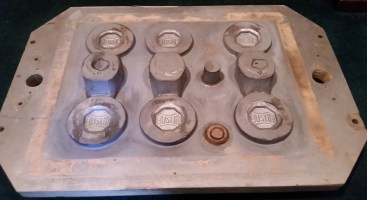 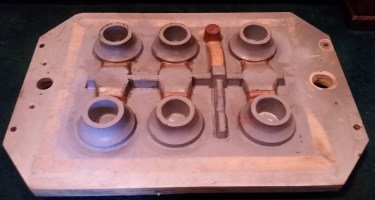 After being threaded to match original American Austin hubs, they were cleaned up to a dull luster. In this condition they can be adapted by their new owner for any car and can be finished to a blindingly bright high polish if so desired.

Here are some photos of the finished product:

John has done a terrific service for the American Austin hobby in recreating these fantastic caps. Making these are available to his fellow enthusiasts will ensure that our cars can be restored properly and adorned with their few pieces of sparkling jewelry. You won’t need to settle for a banged up, smashed, torn, or otherwise mangled hubcap. You won’t need to pray you can get it “good enough”. These hubcaps will make some Austin owners very happy.

If you’re interested, please use the contact form below and I will put you in touch with John. Please note, these were made in very limited quantities and are being sold on a first come first served basis. If you are interested in a set, don’t delay!