If you’ve been following along, you’ll see that most of the items posted here are related to the American Austin and American Bantam cars.  However, if you’ve been tuning in since the beginning, you’ll know that one of the first posts spoke about Betsy, my 1965 T-5 which I’ve owned seemingly forever.  If you’ve ever wondered why this site isn’t “Richard’s Helpful Bantam Links” or “Bantam Car ‘n’ Parts” it’s because there are some other cars I would also like to help people with along the way.  One of these offshoots of cars is the German Mustang, the T-5.  Once I have finished developing the Austin/Bantam area of the website, I’d like to construct something for the folks with T-5’s as well.

The T-5’s were built in small numbers, and not that many have survived over time.  Each T-5 built, though, was far superior to every other production mustang built.  Beyond upgrades made to the cars to ensure better handling on rough European roads these cars are fantastic.  Rather than just succumbing to the whim of the factory workers, each T-5 was inspected with a fine tooth comb before it was able to be marked as a T-5 and shipped abroad.  The goal of the inspections was to make sure that the cars were not only within tolerances acceptable for production cars, but to make sure the cars had a strict adherence to the engineering drawings.

Just a blueprinting an engine brings out the very best as imagined by the engineers, blue printing the pony car did just the same.  These cars are surprising handlers, especially if compared to their brethren.  My Betsy can take a curvy mountain road with the best of them.  The only draw back is the Automatic transmission, but that is easily fixable.

So, today, for the few people out there looking to restore or refresh their T-5’s I am proud to offer the first T-5 related eBay link.  This link is to one of the most difficult parts to find for our cars, besides those ridiculous hubcaps.  For your enjoyment, an NOS pair of T-5 emblems.  When I found the used pair I initially ended up with for my car, I had to drive 5 hours and pay an unfathomable sum that I’d rather not remember. 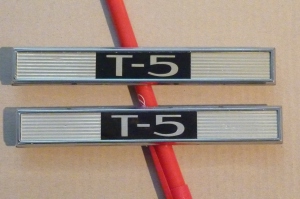