A cocky alloy rooster perched haughtily atop a cast aluminum base.  Polished to produce a glint in any potential customer’s eyes, it was clear that this rooster meant business.  Wouldn’t it mean business to have it perched atop your sporty roadster?  Wouldn’t it give other motorists the idea that your bantam car packed more than pint sized power?  You’d probably dole out the additional few dollars for the Custom Line Austin or if that was too much you may just buy the accessory cap.

Okay, so maybe it wasn’t a trophy per se back in the day, but this ash tray is marvelous.  Given that the base has a corresponding casting number to the Rooster, it is likely that these two pieces have been long time mates.  My best estimation is that this served as a promotional piece to help Austin dealers up sell potential buyers or served as some sort of reward for successful sales agencies.  Personally, my money is on the former.  So, it probably padded his wallet and was quite the piece to hang onto.

Many experts agree that these roosters were originally available in a pewter toned finish which was a product of not polishing the casting.  This is what an original NOS unit looks like:

Posted to the AABC Facebook group by Cathy Cunningham, the Rooster perched above an ash tray is quite a find.  As you’ll see below, this rooster (who has likely been exposed to decades of secondhand smoke) is a bit more polished and glamorous looking.

Yet, both the NOS cap and the polished rooster share similar casting numbers and mounting means:

In a slightly zoomed out photo, you can see that the casting number on the ash tray base has a similar suffix as the rooster cap itself, indicating that the base was likely designed to compliment the cap around 1933 rather than being a more modern addition. 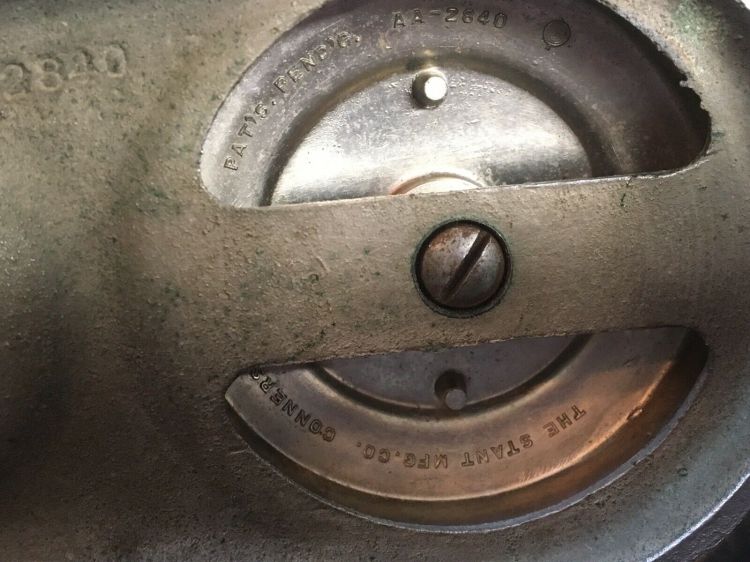 The seller has rejected offers of over $500 and is waiting to see where the auction goes.  As of now the starting bid is $425 with a little over two days left until the hammer falls.

So, even if this wasn’t a salesman’s trophy, perhaps it will be the trophy of your collection.

The other day, I received an email from a person who had what he believed to be an American Austin radiator cap.  We exchanged a few messages and the owner sent me a few photos.  It’s always nice to chat with people regarding parts they have, helping them identify them, and ultimately helping them to find a good home for what ever they have.  If you have any parts or cars that you are looking to identify and pass along to a new home, feel free to contact us.

If you are interested in learning more about the history of American Austin rooster cap reproductions, click here.  The seller shared a photo with me of the bottom, indicating that it does not have any of the original Stant manufacturing information.  The lack of lettering and the plethora of detail leads me to believe this is one of the caps made by Hal Thompson, which I believe could have also been sold by New Castle.  This cap is likely not made from stainless, but is chrome plating over some other non-ferrous metal.

Having had a busy couple of days, I did not get a chance to get this identifying information to the seller before he listed it; but I did just get it to him.

With a starting bid of $50.00, this could end up being a tremendous bargain.  I picked one of these up a year or so ago after a lot of hunting and am likely going to use it on my 33 Austin.  At the price, why not cast a bid?