$4,000 is a lot of money, there is no question about that.  So when confronted with a price tag calling for that much money, it’s best to be an intelligent buyer.  This engine has been listed for auction by a seller who has been listing a lot of Bantam and Austin parts over the past few months.  This engine is probably one of the greatest finds in the collection because of the potential it may offer.

I don’t have an awful lot to say about this engine, as people have their different views on rebuilt engines and engines that are rebuilt but lay dormant.  While some may recommend tearing it down to go through the engine, others may be willing to run it as is.  If you’re willing to accept this as being equal to a modern rebuild where all of the parts have been wet magnafluxed, rebabitted, and assembled with the highest quality materials; this could be a bargain.

In theory, I believe it should be torn down and inspected before being run; but then again I am usually a “get the ether and a jumper pack” kind of guy because I just want to hear the engine come to life (which is a terrible idea).  I’ll let you be the judge, but I’ll give you a few things to consider:

This is what a NEW or never run rebuilt Brennan IMP looked like in the exhaust ports after laying dormant for years.

This engine could be great or it could be a very expensive (but pretty) collection of parts.

What are your thoughts? (A few people have already chimed in and have inspired some additions to this post).

The results are back from the machine shop, the crank is good! 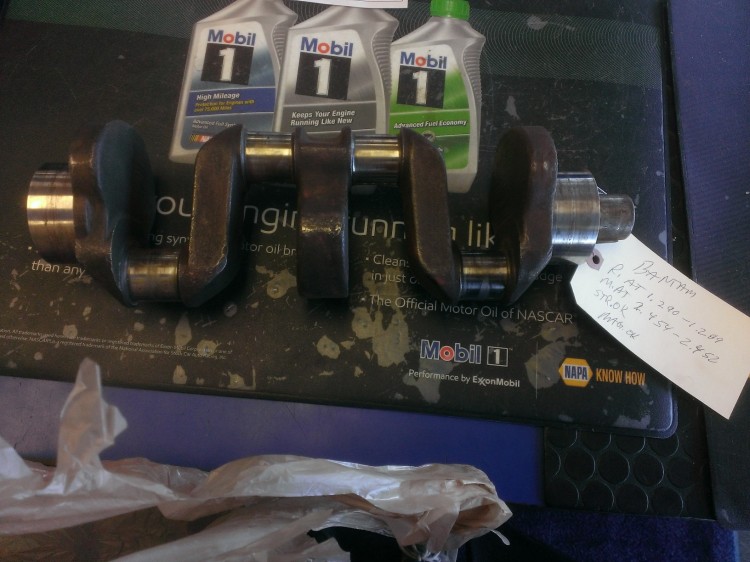 The man at the machine shop recommended a polishing of the journals at most, but said the rod journals looked nice. 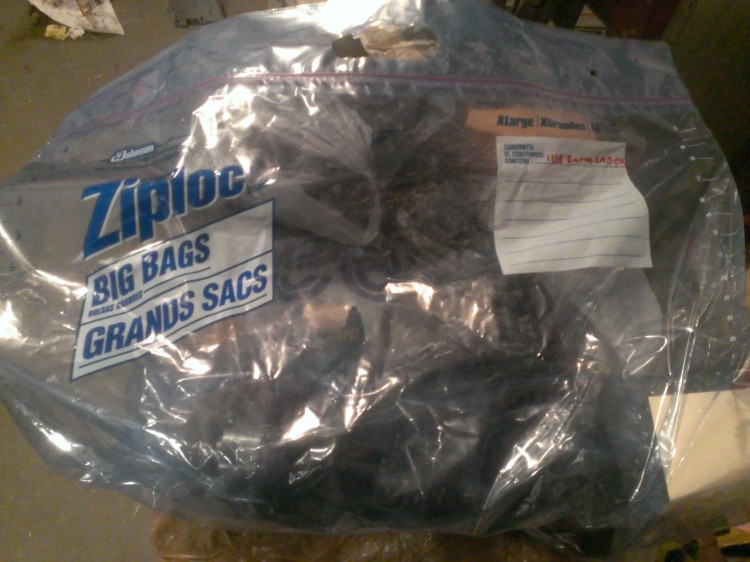 Ziploc makes great bags for your crank shafts awaiting their destiny.  Just oil up the crank, place it inside, push out the air and lock it in.  You could get a little extra fancy and add one of those silica packets from a shoe box until you know exactly what you’re doing.

As for this crankshaft, I’m not quite sure what I’m going to do with it just yet.  All of the other pieces that make up the engine are inside of a large plastic bin in my garage.  So, which ever way I end up going, I at least know that this crank is supposed to be a good foundation for an engine.  Whether I gather up replacement parts to fix the cracked pieces on this one, or use it as the basis for another engine, it’ll be nice to know that the piece holding it all together is straight and strong.

After everything, I am thinking that this engine was fully rebuilt at one time and the person who did the work was very angry when the engine wouldn’t turn over all of the work.  The owner may have let it sit for a while, trying to decide what course would be best to take and finally decided to get rid of the car.  Wanting to make sure that no one could use the car easily again, the person may have taken a hammer and destroyed the parts he knew would cause this car to be out of commission indefinitely.  With the crankcase destroyed and the bell housing smashed, just sliding new parts in would have been difficult.  Destroying the gas tank with what looks to be a pick axe may have also been part of an angry seller’s plan.

Either way,  there are enough empty crank cases out there awaiting a nice crank like this, and enough cars waiting for a good engine.  The car this came from is being hot rodded by a father and son who are looking to do it properly.  So, the car is finally getting a new lease on life, and its parts may do the same for another Bantam or two out there.

This is the second installment in the tear down procedure.  I left off with needing pullers to get the rest of the engine ready in order for me to pull the crank out.

If you do not have a three jaw puller, you can usually borrow them from Autozone or Advanced Auto Parts.  They charge you the full price of the tool, and refund it upon return.  It’s a great service, however the tools are generally about the same quality you would find at a Harbor Freight.  So, if you decide you’re in love with the tool or it is something you will need repeatedly, it would be cheaper to buy it almost anywhere else than to keep the one from the auto parts store.

I left off with the crank pulley still attached to the crank.  Since the cover behind it is aluminum, there is no way I want to pry against it, even though it’s already broken.  The piece that is broken is very repairable.  The pulley however, is already broken, with a large chip out of it.  I believe they make special pulley pullers, but I didn’t really think about it at the time I was renting this one.

Keeping the crank engagement bolt in place, I attached the puller as you can see below.  When you do this, make sure to thread the bolt into the crank so you don’t foul up the threads, but leave room so you have where to move the pulley.  Removing the washer will help.  If you don’t provide ample room, you may not realize that the pulley is infact moving, but you are just pulling against the bolt.  This will result in breaking the cast pulley even more.  I’ll let you guess how I found that one out.

The pulley is kept in place with a key, but it pulls off nicely.  Once it is off, removing the perimeter bolts of the cover allow it to free itself and you are then faced with the next challenge, the timing gears.  At first glance, it looks as though the right way to do this is to remove the nut from the cam to take those gears off.  This nut has been marred in an effort to keep the assembly attached.  Attempting to take the nut off ended up yielding the entire cam assembly.  This is okay for me for now.

The last challenge on the front end of the crank case is the timing gear attached to the front of the crank.  The puller and the crank engagement bolt will come in handy here.  Make sure you have the jaws engaged so you don’t damage the teeth.  (This one I didn’t learn the hard way).  You may want to soak this in your favorite penetrating fluid.  Now all of the front end impediments to pulling the crankshaft out have been dealt with.  If you look carefully, you can see more damage to this crank case, the lower two bolt holes are broken.

The next challenge will be dealt with tomorrow.  This final step in pulling the crank out is by far the most important.  Once you pull off the flywheel, you will see 6 fasteners holding in the rear bearing carrier.  You will also see two holes that have nothing in them.  These holes are threaded and are going to be very important in getting the crank out.

For part three, make sure you have two bolts that thread into those holes that are over an inch long and a space heater.  In part III, you see what to do with them.  Don’t touch your engine until you read the rest.

Also, this is the perfect time to say, if you haven’t joined the clubs, DO IT.  If you’re not interested in the club scene or the great people you’ll meet, at least do it for the tech information. The Austin Bantam society has a wonderful CD indexing all of the tech articles that both clubs have put out during their existence.  Among those articles is most of a great engine rebuilding manual.  The guidance of that manual and the club members have helped me greatly in this process.

Remember, when it comes to Bantam parts; don’t break them, please.

The odometer only shows 37,000 miles or so.  The frame looks like new.  The sheet metal isn’t even that beaten up.  So what happened to this car?

I had the chance to pick up some parts from an early 1938 coupe this weekend and with it was an engine.  I had known about this car when it had first hit craigslist and ebay about a year ago.  In the interim, a person bought it to build a hotrod from the body and was looking to sell the rest of the parts to make room for his project.

As you know, Bantam engines have a reputations for crankshaft problems, and I was thinking that with everything presenting as it was, perhaps crankshaft failure was the reason for this car’s premature parking.  Looking at the crank case, I saw it was obliterated, but wasn’t sure what else was wrong with the engine. I got the engine home to find the flywheel turned, but not all of the way around.  Even though it was late, disassembly began. 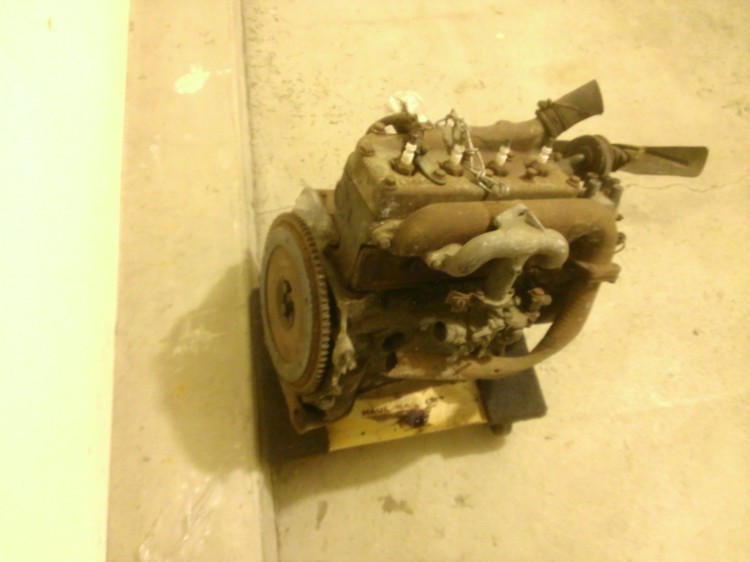 Finally home and waiting for disassembly

As you can see, the entire back of the crank case is destroyed where the cast in bell housing meets up with the cast iron bellhousing adapter on the transmission.  Even more strange is that a large ring is entirely missing from the flywheel just aft of the ring gear.  Without this ring, there is no way to mount a Bantam clutch assembly to this engine.  If you look at the corner of the oil pan, you can look right into the engine.

With the pan opened up, the crankshaft became visible as did one of the reasons the engine wouldn’t turn.  The rod bolt for piston 4 was interfering with the bracket for the oil jet.  Also visible are signs of welding on the oil dippers integral with the caps and shims, possibly indicating a rebabbitted engine.

Further inspection shows that this engine had blown up at one point as there is a lot of damage to the crank case which has been welded up.  Presumptively, someone was hoping to bring this engine back to life, and forgot to tighten one screw all the way.  The flywheel that came with the engine was rubbing on the back of the block as a spacer was missing, but placing a different flywheel assembly on the rear alleviated that issue.  If you look, you can see the difference between a correct flywheel and one that has been heavily damaged.

In order to take the crankshaft out, which is the ultimate goal, I need to take quite a few parts off of the engine.  Taking the pistons out revealed a crankshaft with very nice looking journals and an odd assembly of rods.  This engine has two rods marked number 1 and no number 4.  Each rod has had a number of lines filed into the beam indicating which cylinder it corresponds to and attempts to cover up the original markings are present.  Two of the rods are part number:  A -3677 while the other two are A -3677 X which markings are quite different from the others.

The cylinder block looks quite nice upon closer inspection.  Here are a few miscellaneous photos highlighting the condition of this engine.

Although I was hopeful that this engine would have shown itself to be in better condition when I picked it up, all is not lost.  There are some really great parts on this engine that may either allow an entire other engine to be rebuilt (if the crank comes back good), or a bunch of parts that may help several other engines get back together.

The next installment will show the removal of the crankshaft and further disassembly.